The Grounds of Alexandria have been such a hot topic among the cafe society. It first opened in April 2012, re-vamping what used to an industrial car lot in the suburb Alexandria like its name suggests to an upbeat busy hospitality business. To quote from the Grounds itself:

Located in a former industrial precinct from the 1920s, The Grounds of Alexandria is a landmarkcafe, restaurant & bar, garden, bakery & patisserie, coffee roastery, animal farm, florist, markets and more.

The Grounds of Alexandria does indeed deliver its words. The place has everything from restaurants, its own coffee roastery, bakery, its own animal farm, florist, market. Of course, you can not forget about what all bind every little part together is the garden in between. The garden of which is beautifully maintained, greenery everywhere, flowers blooming. Safely to say it almost feels like you have walked into one of those fairy enchanted worlds. The venue is definitely is in a unique location, surrounded by factories and industrial building, one hardly would think there is a place of greenery among it. But there is. After hearing about this famous place and after a while I finally got up and travel to see it with my own eyes such a place. Photos can be deceiving, I been told.  Let’s take a walk through this gorgeous venue. Like every other venue, if it’s famous, it bounds to be busy. Busy mean business is good. So some booking might be needed if you really tight for time and want a table. 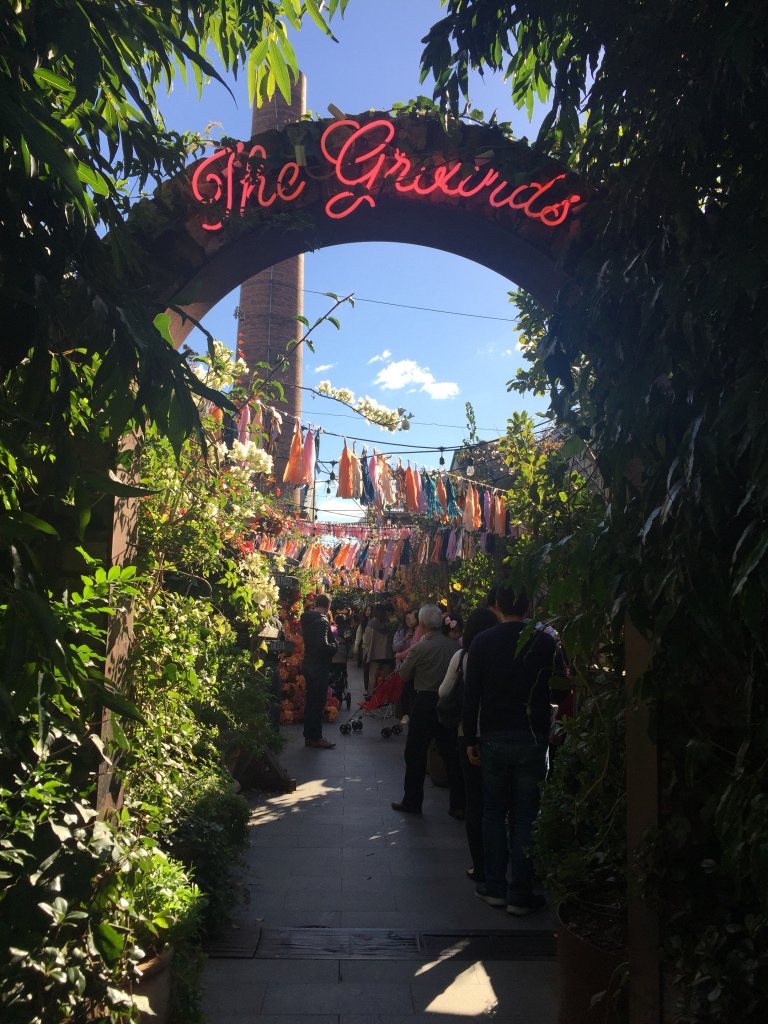 There is something melancholy about the place when there aren’t many people around, it is a lot quieter, spacious, and the spaces between everything bring out the beauty of the place even more. There are so many entrances, one of them catches my eyes is the entrance that takes you pass the ‘Potting Shed’. The Potting Shed is part of The grounds own restaurant. It opens from 11:30am in the morning till late. 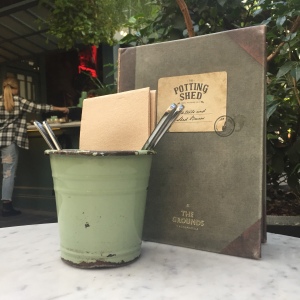 The Potting Shed is an interesting cafe/restaurant. As it name suggest, the entire place is basically inside a plant house. You’re surrounded with plants, all sort of them. Whether they are hanging above your head, or right next to you. Everywhere you look there is a green to it. You think with that much green Potting Shed would look a little bit too overwhelming. But surprisingly, it doesn’t, it works well with the mismatch choice of tables and chairs, along with benches. This feel like a walk through the botanical garden. There is some calming about it. Don’t forget there also some plant puns. Which to some might be hilarious. 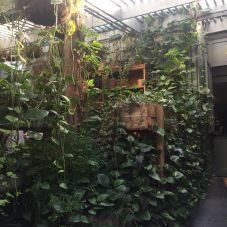 Like I mention above, the Grounds operates with different sections, and each section have their own unique attach to them. Their own menus and such. I decided, since The Grounds is created upon the idea of open spaces of greenery, I should check out the Potting Shed for some snack. As someone who loves bar hopping as much as cappuccino to start the day, I simply can’t wait to check out their cocktails and possibly cakes. (Odd choices, I know). For a cocktail theme, Potting Shed really stick to their charming garden vibe as inspiration. They even create a twist on your everyday average pina colada and bloody mary. With pina colada serving from a pot and a bloody mary which isn’t bloody at all until you decide it is. Yes, I mean a deconstructed bloody mary, you are the one to decide, yes I want heaps of tomato juice, or no I want this cocktail to be super spicy. I decide to order a cocktail that a bit less intense, which is the ‘English Garden’. It’s a gin-based cocktail. Adding some apple and cucumber (although I’m hoping apple is an apple liquor). The cocktail came out in a martini glass, although it looks almost like a smoothie I assure you, it ain’t no smoothie As for my cake, I opt for a caramel cake with some caramelised popcorn flavour ice – cream, garnish with some honeycomb. And yes, the tase – YUM. 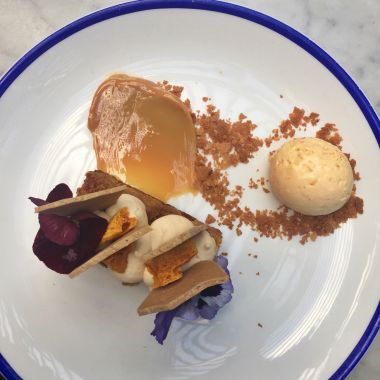 After the lovely chance of trying out the mixologist and pastry chef’s talent, in term of food journey there only one thing left to taste: Coffee. The Grounds pride itself it having its own roastery (kudos for this). I more than excited to try out their coffee. However from a different section of the venue.

As you walk out of the Potting Shed and you keep walking straight and there you find is no other than the florist. I mean, what the point of a Potting Shed if there ain’t anything plant related come out of it aye. 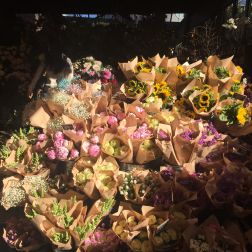 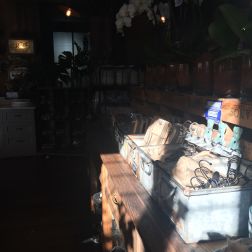 The florist is beautiful, filled with different flowers, and even small home decor trinkets.

My my, if anyone is into a bit of retro-home decor, well you pretty much come to the right place. You can eat and you can shop, what better aye.

Pass by the florist if you haven’t yet got yourself a bouquet already, you will come to the market. Unfortunately, it isn’t open when I go :(. But as I was told, there pastries cart, ice cream parlour, again flower carts and many other things. As well as this romanticised sign of the world most well-known quote:

Doesn’t that just make you say aw? If you keep walking, you’ll hit the main garden. Here you got the long tables, short tables, basically an outdoor space. You’re welcome to eat here but they all have to take away. Since the area is not table services. Which is fair it is pretty massive. 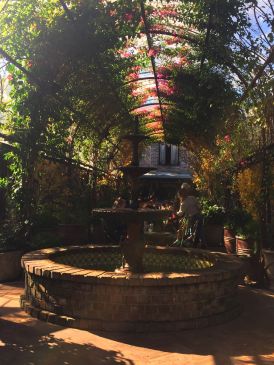 Around there is also a mini greenhouse, but instead of having all plants inside its a table. And all four corner of the house is wrapped with vines. In a way, it’s like your very own private room. Even though all the wall has holes in them, people can see through so closing the door is kind of pointless. However, it makes a really pretty shot through the window.

If the spot isn’t to your desire, then you can always keep walking around till you find a spot you love. Advice once you do, dump your stuff (not so valuable stuff) on the table and claim as yours. Because always remember is always peak hours in The Grounds. I too also find a variety of different spots for myself. Mostly for my little sketchbook, while drinking my coffee. I don’t really need a massive table for it.  The coffee, it’s nice. It doesn’t quite have the smooth blend like ‘Little Marionette’ instead a slightly stronger blend. Definitely made for those who love coffee.

Yea, where better to draw than being surrounded by sunlight and plants? It gives you the best inspiration of what to draw. As I got a chance to draw what I feel Kevin Bacon look like. (If you want to see drawing, it’s here)

Oh no, not him of course. I think we all know what Kevin Bacon look like ( I mean how can we not? #Footloose)

The Grounds got it very own Kevin Bacon, which is their cutie pig. I know I know, a pig named Kevin Bacon. Pretty fun and kind of ironic. But probably that’s why it’s iconic.

The venue does prize itself of having an animal farm. Of course, it does have one. It got everything from chickens, goats and obviously a pig.

All saying aside, The Grounds is definitely a venue where you can walk around, get lost and find yourself a part of the Grounds you really like and enjoy a nice snack, beverage or just simply admire Kevin here. I didn’t get to go to the Cafe section, as it was way too busy. But the name speaks for itself, its structure like most cafe look like, similar to The Grounds of the City but a bit brighter.  I do really enjoy walking around, exploring, however, there is a catch: it’s pretty expensive. So I don’t know about it being your local cafe,  but definitely for special occasions. Or a place to show your friend around.

Do familiarise yourself with the fast pace of the Grounds. As its busy, the employees are doing their best to give you an amazing service, while handling a handful of guests. But if you ask me, if they live up to the hype everyone talking about, I wouldn’t say yes and I wouldn’t say no either. Even though the place is gorgeous, enchanting, some part of the service despite it busyness still can be better, and some part of the food doesn’t really live up the hype I was hoping it to be.

Over and all, I still enjoy my time at The Grounds, and definitely for those who never been, go. And check it out, but don’t put it too much of expectation of blowing your mind away. I myself believe The Grounds of the City is slightly better. 🙂

View all posts by slofypilgrim

4 Replies to “The grounds of Alexandria – a garden among industrialisation”